One fine afternoon we took a drive over to another section of Acadia National Park, the Schoodic Peninsula. It’s about an hour’s drive from Bar Harbor, up off the island and then north on US1 for a ways along the Scenic Byway, then southeast onto the Peninsula.

You can see Mount Desert Island in the bottom left of the corner.
The Schoodic Peninsula is the only portion of Acadia National Park on the mainland. Much of the peninsula was once owned by John G. Moore, a Maine native and Wall Street financier. In the 1920s, Moore’s heirs donated the land to the Hancock County Trustees of Public Reservations with the stipulation that the land be used as a public park and for other uses, including the “promotion of biological and other scientific research.” In 1929, legislation authorized the National Park Service to accept land on the Schoodic Peninsula as an addition to the park and changed the name of the park to Acadia. Soon after the law’s enactment, the Hancock County Trustees of Public Reservations donated the former Moore property (2,050 acres) to the National Park Service “for the public good and for the extension or improvement of said park, forever.”

In the 1930s and 1940s, some of this land was transferred to the U.S. Navy for use as a radio communication station. The U.S. Navy operated the base until the land was transferred back to the National Park Service in 2002.
The former base has become the Schoodic Education and Research Center, one of 17 National Park Service research learning centers across the country. The center facilitates research projects throughout Acadia National Park and provides opportunities for learners of all ages to discover the park’s natural and cultural resources. (excepted from NPS brochure…they said it better than I could :-)).

We had wanted to get the dogs out for some walking, and there are four different trails on the peninsula in the park. We need the milder trails now for Chelsea (her arthritis is hampering her a bit), so after looking at the guides, we thought the Alder Trail and Schoodic Head trails wouldn’t be too hard for her. First up, though, was a drive on the six mile one-way road scenic drive around the peninsula, with a stop at Schoodic Point to gather a couple of caches. 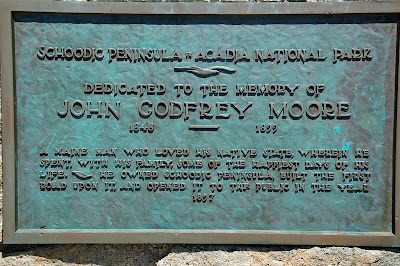 There’s a plaque at the parking area dedicated to John G. Moore.
Continue reading the rest of this article...