Share This On:
Facebook0
Google+0
Twitter0
Pinterest0
“For reasons I cannot explain there’s some part of me wants to see Graceland.” – Paul Simon
That puts it nicely. Neither Rick nor I have ever been Elvis fans, so what are we doing here? Who knows. But we were going to be in Memphis, and thought, why not? Elvis Presley and his home are cultural phenomena, so perhaps we better witness it and see what we see. 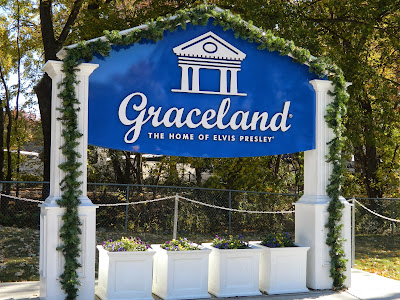 Admission to Graceland is not cheap. With a senior and AAA discount the basic tour for two came to $57.  We maintained hopes for the best.  We were directed to a line for the shuttle, passing the first of many souvenir shops along the way, and given our headsets for the guided audio tour.
The shuttle bus delivered us on the front porch of the “mansion,” which is only a mansion by the standards of a young man born and raised in Tupelo, Mississippi.  It’s about the size of a larger home a northern suburb, maybe comparable to one of the McMansions that are going up all over the country – maybe smaller.  I believe he bought the home in 1957, when the property was out in the country south of Memphis. 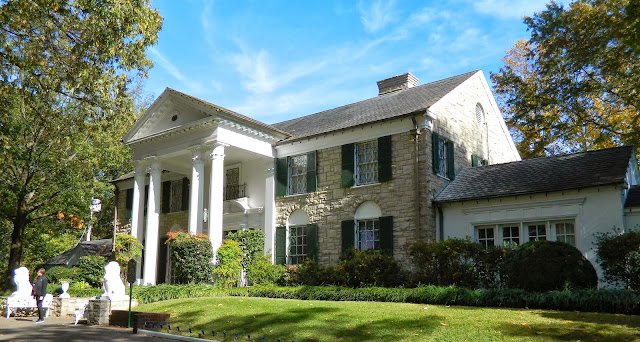 We were directed into the front hallway by a guide, and then we were on our own with the audio tour.  First room – the living room – and right away we were transported back to the sixties and seventies. This house is how someone from that era, who came in to a lot of money, but had no history of privilege, power and class, would decorate their home. The rooms are of typical size and the decor is, well, how can I say this, ghastly? no, garish? no, gaudy maybe? I give up. What it triggers is a whole set of classist, judgmental descriptors that are out of place and time. It is what it is. 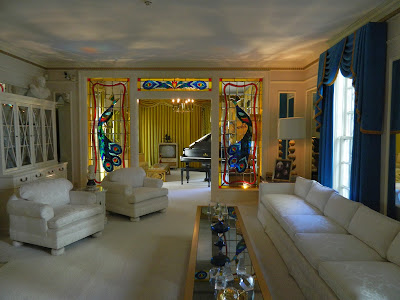 The staircase up to Elvis’s private floor, which remains private.