We will have an update on our slide problem shortly as we are now on Plan C. Let’s hope it doesn’t drag on like Judy’s refrigerator repair. It seems like there is always something to fix on our homes on wheels doesn’t it?

As promised here is more on the many Catholic Churches on the Keweenaw Peninsula of the Upper Peninsula. When immigrants to this country settled in a region each ethnic group built their own church. In Calumet the French Canadians built St. Anne which we recently blogged about here and is now the Keweenaw Heritage Center. As mentioned in the previous blog entry St. Anne was deconsecrated in 1966 which was a big year for the Catholic Churches in Calumet.

In 1966, four of the five remaining Catholic churches in the Calumet area were forced to merge because of the low number of parishioners and economic constraints. This included St. Anne, which we have talked about, St. John (Croatian), St. Mary (Italian) and St. Joseph (Slovenian). The combined parish was housed in St. Joseph. So that everybody could share the pain so to speak St. Joseph had to change it’s name to St. Paul the Apostle. At the first combined Mass and to this day the ethnic groups have their own “area” where they sit. The parish of Sacred Heart was the first in Calumet and was allowed to stay open and is open to this day. St. Anne is the only church that is no longer under church control, St. John and St. Mary are still church buildings used for storage. A sixth parish, St. Anthony, was the Polish parish and it closed in 1928.

The walking tour group of Bob and Jo, Bob and Wilma, and Jim and Sharon tried to take a tour but the church was closed. Bob and Jo went to Mass there one Saturday and mentioned to one of the fellow churchgoers that noticed we were visitors how we so much wanted to stick around and take photos after everyone had left. They did us one better, they talked to Fr. Abraham and he took us on a personal tour after Mass.

Here is the exterior of St. Paul the Apostle dedicated in 1908, the twin towers are visible from quite a distance.

The church is magnificent on the inside 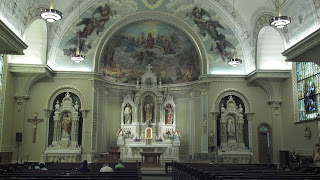