Labor Day weekend we took our one and only overnight trip away from the ranch. I had read about one of America’s most beautiful scenic highways, the Beartooth Highway, a 68-mile long National Scenic Byways All American road in northern Wyoming/southern Montana. Its been dubbed “the most beautiful roadway in America”, so we decided to head up there and see for ourselves :-). Our friends John and Carol Herr thought it sounded like a nifty excursion and made plans to join us as they had Monday off for the Labor Day weekend holiday.

We met on a rainy dreary Sunday morning around 10AM and headed north to Yellowstone. It was actually a later start than planned, but we ended up having a minor veterinary emergency with Casey, necessitating a Saturday evening trip to Jackson to have him checked out. I’ll spare everyone the details, but he is fine…most dog owners will understand when I say he was a little clogged up and needed his glands expressed…and we were able to hit the road as expected.

Our course went north through Yellowstone to Fishing Bridge area, where we turned east and went out the east entrance of Yellowstone towards Cody. It was a pretty steady rain all morning, so I have no pretty pictures of our drive through east Yellowstone. We made a few leg stretch stops along the way, as we both had our pups with us…John and Carol have an adorable King Charles Spaniel named Jimmy. We stopped at the Buffalo Bill Reservoir… 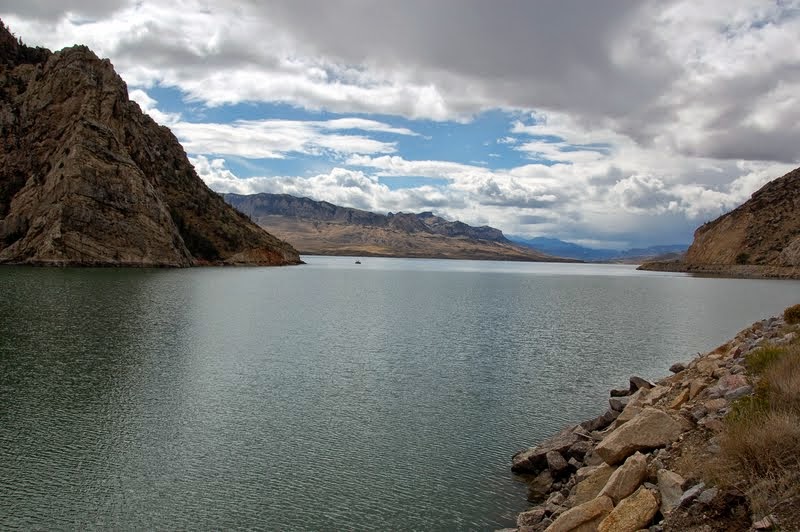 where we saw these really interesting rock formations 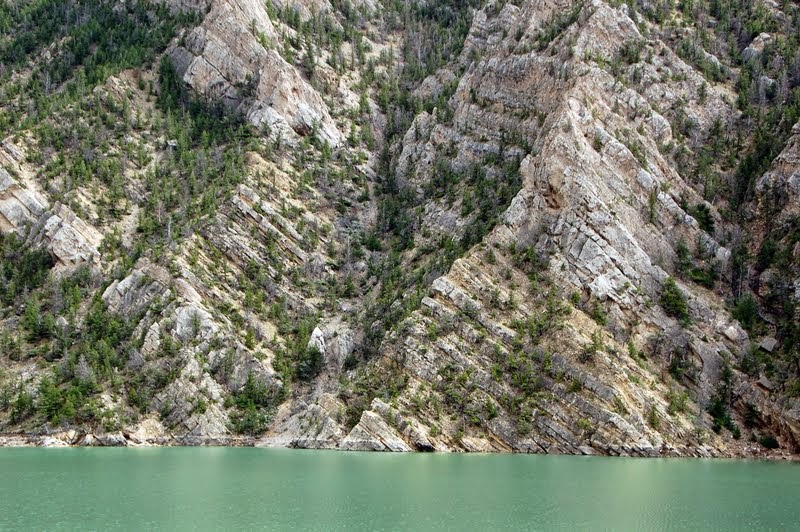 I really liked the diagonal striations of the rock wall. It very much reminded me of our excursion in Colorado, the Morrow Point Reservoir.
It was just a short distance from here to the town of Cody, where we made a brief pit stop at WalMart….our first time near one in three months :-)! We did a brief tour around Cody, seeing the Buffalo Bill Center of the West, and then looking for Buffalo Bill Village, as both couples have had offers of employment from them in the past. We thought it would be kind of fun to see what it looked like! But as we started heading north out of Cody to our overnight destination of Red Lodge Montana, trouble reared its ugly head again. John and Carol’s car started having problems, and rather than head further away from a large town like Cody, we turned around to see if we could find a service station that could diagnose the problem. Remember, its now about 5PM on Sunday on Labor Day weekend; surprisingly, we did find an Exxon station with a service tech on duty, who was able to put the computer on the jeep and get a reading. Now I’m not mechanical or …