Bob recently went with his friend Bob to the Phoenix Holiday RV Show. This is Bob’s (both of them) kind of show; free parking and free admittance.

The show was held at the University of Phoenix Stadium (where the Arizona Cardinals play) in nearby Glendale Arizona. For the RV Show they pulled the field out. 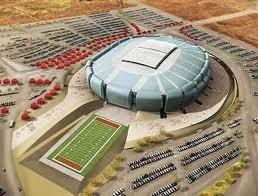 This is a great stadium to tour, if you ever get the chance you won’t regret touring this stadium.

Also Bob’s kind of show is that although there were some neat RVs to look at there was not the one that made you want to trade up.

Before the show the Bobs ate at Which Wich Superior Sandwiches near the stadium and we both agreed that our better halves would enjoy this place. It was a great time for the Bobs while the better halves were at their Christmas luncheon at the park.