Share This On:
Facebook3
Google+0
Twitter0
Pinterest0
On Wednesday Roger and Lynn pulled into a site just down the row from us.   They didn’t have a long drive from where they had parked their motorhome previously so after they got set up, we went to tour Old Tucson.  Old Tucson has been around for years.  It’s famous for all the movies that have been filmed there.  You most definitely step back in time in the old west town which became famous as more than 300 movies and TV shows were made in this old town!
Roger and I did the underground mine.  We were actually looking for any gold that might have been left from the 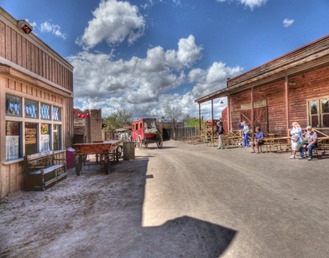 mining since it’s no longer an active mine.  Needless to say, we didn’t find even a morsel of gold.  We also took a train ride around the park and stopped for lunch at one of their 4 restaurants. They had ice cream for dessert but I was good.  I just watched them slurp it down.  All that was really left was watching a gunfight and checking out the gift shops.  That we did and then headed back to the campground.