It’s been more than a couple of weeks since I last posted. Time flies. We did have a very busy weekend here at the campground for Labor Day. Around here, it seems folks wait to see if the weather forecast is going to be good before making reservations, which gives a rather short lead time. The week before, we had what I call “the chamber of commerce forecast” for the holiday weekend: sunny and mild all weekend. The reservations started pouring in, and we were very busy the week leading up to the holiday with making up our info packets, assigning sites, making sure the grounds were ready and so forth. As we got closer to Friday, you can figure out what was happening. Yes, the weather forecast was slowly degrading all week, until the weekend finally arrived and it wasn’t a very nice weekend after all. That does make for some crabby weekend campers, but overall, it was a much more pleasant holiday than July 4.

We have taken several walks, and I’ve started taking pictures of the bridges of Acadia National Park, but that will be a separate post. My nights were mostly taken up with researching the area of Nova Scotia. We had arranged for a few extra days off after Labor Day, and since we are pretty close to Canada up here, Al suggested we take a ride to explore Nova Scotia. Sounds good to me, so off I go.

First off, Nova Scotia is big! 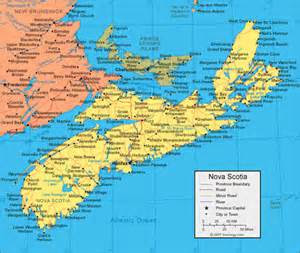 Nova Scotia is a peninsula, connected to the province of New Brunswick by the Chignecto Isthmus. It is 360 miles long in total, with 21,425 square miles of land. I quickly realized I would have to concentrate on just one area, otherwise we’d be spending every day driving hundreds of miles and not stopping anywhere.
The problem with that, though, is that there is SO much to see, do, discover and hike in Nova Scotia. I googled “scenic drives” and there are 11 in total! I finally settled on exploring the area of Cape Breton Island at the north end of Nova Scotia, as the world famous Cabot Trail is located in this region. 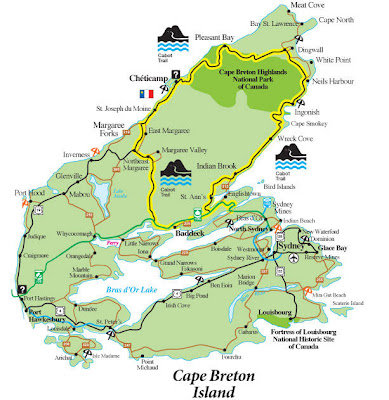 I had also debated the merits of taking the ferry from St. John’s over to Digby, saving a few hours driving time and having a pleasant boat ride. However, Digby is in the southern region of Nova Scotia, so I would still have a few hours drive to reach Cape Breton. Also, the dogs would have to stay below deck in the truck for the crossing, which I didn’t like, and when I figured out how much it was going to cost, it was excessively high compared to the fuel we would use, so I threw out that option and decided to drive.
The next decision was where to stay. I debated taking the trailer and staying in a campground and making daily excursions. I scratched that pretty quickly, again deciding it would involve a lot more driving than …