We toured the famous Hearst Castle and we have to say it is amazing. Neither words or pictures do justice to the magnificence that is Hearst Castle. The story behind the Castle is just as compelling. William Randolph Hearst, grandfather of Patty Hearst, built “La Cuesta Encantada” or Enchanted Hill better known as Hearst Castle on the old Camp Hill site. Camp Hill is where the Hearst family when William was a boy used to camp. William’s father George bought the land after a very interesting journey to become a rich man.

George Hearst left Missouri in 1850 to seek his fortune in the California gold rush. For almost 10 years he was a decent prospector but not the very rich one he would become. Then he heard about the mining near Virginia City Nevada. He bought into what would eventually become the Comstock Lode, a huge amount of silver. George figures into the story because the silver was in the ore and not readily discernible as silver. The Indians had a name for George, roughly one who the land speaks to, and George said the rocks were speaking to him. So he loaded 38 tons of ore on mules and headed almost 300 miles to San Francisco over the Sierras in winter to have it smelted. Turns out it was very rich in silver and he made a small fortune on that trip alone. This started the silver rush in the area.

George used the money he made from mining to buy a lot of land along the central California coast. It was near the small town of San Simeon that they would trek up to the hill and camp, thereby the name Camp Hill. It was near this spot that his son William Randolph built his Castle. Here is Hearst Castle from the Visitor’s Center. 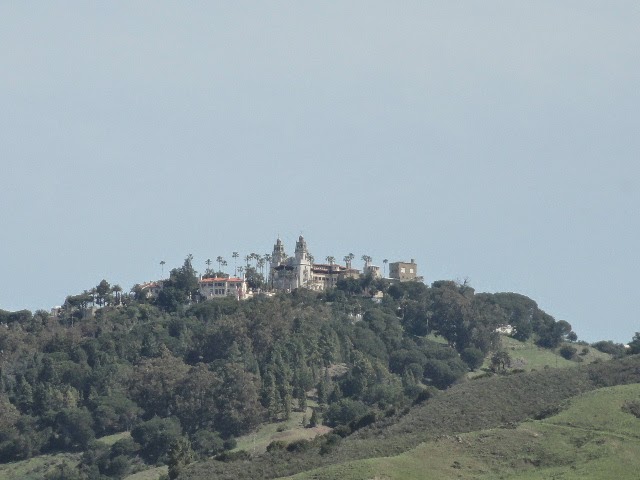 There is so much to see we decided to break our visit into a few blog entries. This one deals with the Grand Rooms Tour, or La Casa Grande, the Big House. Here we are outside waiting for the tour to begin at the front door. 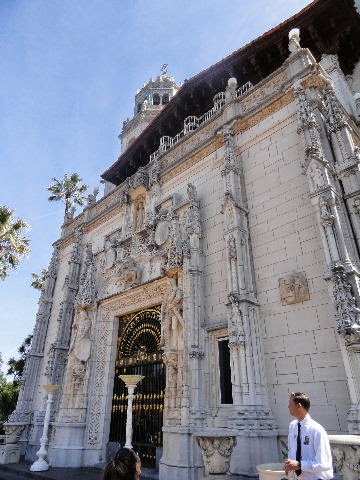 A number of themes will be prevalent throughout the tour, the first one deals with Mary the Mother of God and Jesus her child, aka Madonna and Child. Since this was a Mediterranean style house and since Madonna artwork was huge at that time she is everywhere. Here is a carving above the front door.