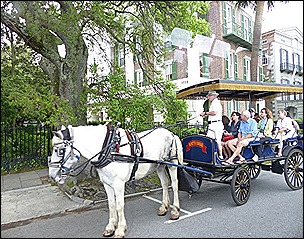 tours we can usually figure out where to go next.     This time it was a little different.  You can get off and on the trolleys in Charleston and they are free but the driver doesn’t double as a tour guide.
We considered  hopping a carriage but then we were concerned that the weather forecasters might be right and it really might rain hard. Instead we decided to go with Adventure Sightseeing.   Now the tour guide was very good.  She told us a lot about the historical area as we drove through it.  The bus itself needed quite a bit of inside work. Just about everything appeared to need a good cleaning or be replaced. 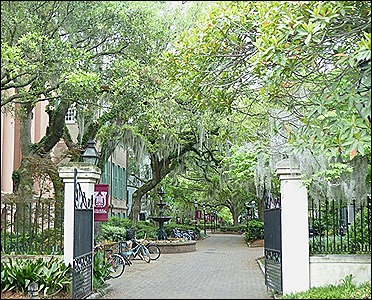 The tour usually returns to the Visitor’s Center but we got off at the Old Market in the Historical District instead.  There we could revisit the places we wanted to see a little more of.  It also gave us a chance to get a bite to eat and walk through the Old Market.
Notice the houses appear to be built sideways on the street and that the front door isn’t really a door to anything except to the front porch.  We discovered there is a reason for this.  The doors were left open if they were accepting company.  Horses were the main mode of transportation at the time these homes were built.  Thus, clean-up didn’t always happen and the heat and humidity at times made the street odors unbearable.  Keeping the front door closed helped keep the odors out.

Besides that taxes on those houses were assessed by the amount of street space they took up.  Thus, they were built wit…