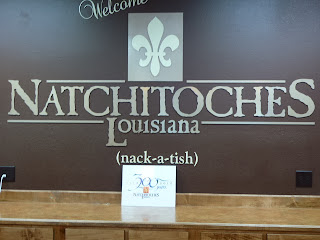 Are we the only people in America who didn’t know this gem was here. Known for the Christmas Festival of Lights – which we stumbled upon was just beginning to come to life, the city park and river-walk, along the Cane River, in the historic district is beautiful, quiet and just steps away from the many shops, cafes and historic colonial era homes that line the shore. 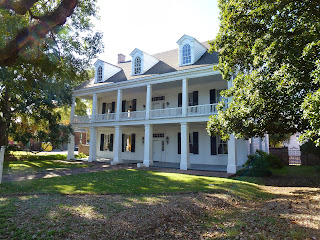 A short walk from downtown you can see this Prudhomme Rouquier house which belongs to the family that also owned the Oakland Plantation just a few miles away – now Cane River Creole National Historic Park. Est. in 1821 it continued to be occupied by the Prudhomme family until 1998, at which time it was turned over to the NPS 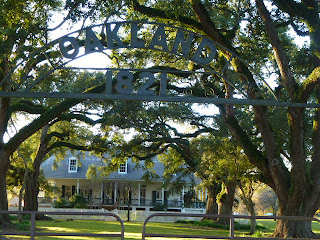 (the live oak trees above were planted in 1826 to direct the wind into the house for cooling.) 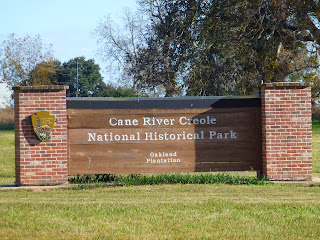 and is now the Cane River Creole NHP.
﻿
﻿
The plantation is almost completely intact as it appeared in the mid 1850’s with just one or two changes. The cook’s cabin was moved, in the 1930’s  to another part of the property for use as a hunter’s lodge; and the main house has been restored back to the 1960’s era – considered the end of the “sharecropping era”.
This 3 sash window section, is not only in-line 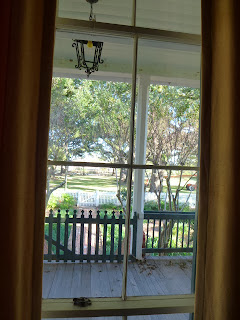 with the front gate, but the 2 lower sections move up to allow for an additional ‘entry/exit’ into the main house. One on each side of the front door provided additional air flow during warmer months.
The 3,000 bottle garden below, beg…