Share This On:
Facebook0
Google+0
Twitter0
Pinterest0
Get your facts first, then you can distort them as you please.
Lake Havasu is a beautiful little town.  Just about everything you would want or need could probably be found there.  It’s kind of like being in Yuma in the winter.  There are a lot of snowbirds and the roads are full of traffic. 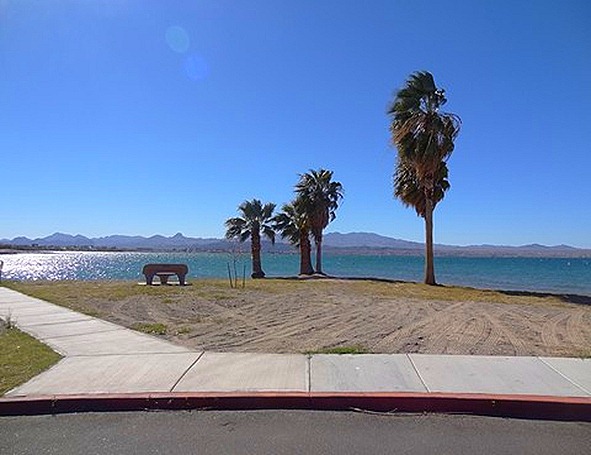 We had been told about a couple BLMs in the area so we were looking for them as we drove north on Hwy 95.  One was the The Steps area about mm 164.  It’s about 10 miles south.  It’s a nice level area and several RVs were still parked there as we passed by.   We also passed another area (Standard Wash)  just south of town where we saw a few more RVs parked.
We had also been told about a couple other BLM camping areas.  One of those was just north of the airport and we went looking for it but couldn’t find it.  At least we didn’t see any RVs parked close. The only place we discovered north of town was about 10 miles north.   Did we miss the one at the airport or is it no longer a BLM area?
The other place was close to the Beachcomber’s RV Resort at the end of McCullough Road.  That would have been a gorgeous place to park had that been BLM land because it was right on the lake.  We did see a few RVers parked there so talked to them and discovered it was day use only.  No overnight camping was allowed.  We were certainly hoping this one was right on …. but it wasn’t.
It’s not that we didn’t like the Lake Havasu State Park and were looking for someplace else to go.  We did like the park but we also like checking out other places for possible future visits.  The state park is in a perfect location and it is beautiful.  The quail and cottontails are all over the park.  In addition there is even a really nice cactus garden.  It’s a short term park and campers are limited to a 14-day stay at $20 per night for dry camping — water and dump is free.  Would we return …. absolutely.  The point is to let the Dwyers know if they reserve a spot on the lake, they will be able to launch their boat from the site!!
Continue reading the rest of this article...